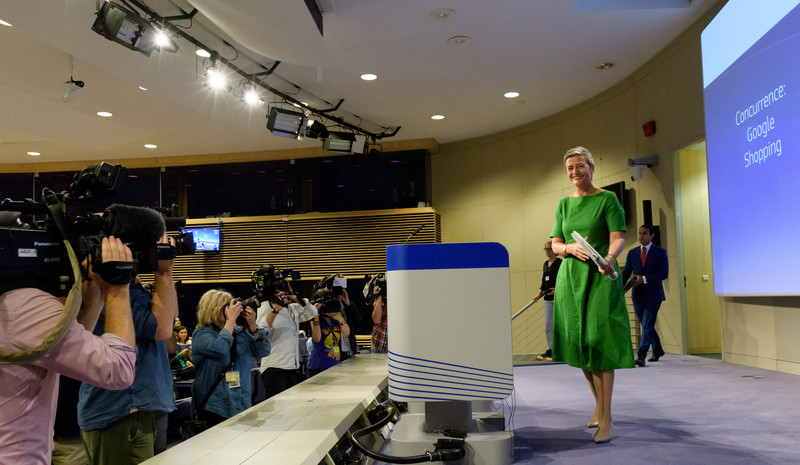 Vestager: "Visibility and traffic are two sides of the same coin" (Photo: ec.europa.eu)

"Google has abused its market dominance as a search engine by giving an illegal advantage to another Google product, its comparison shopping service," EU antitrust boss Margrethe Vestager told journalists.

Google Shopping", as the service is known, was not attracting customers merely by offering a better product than its rivals, she went on, but by using its search engine to promote the service and demote those of competitors.

Starting 2008, whenever someone googled a product, the company displayed ads for its own shopping service at the top or near top of the page, while the most highly ranked rival sites appeared on average only on page four of Google's search results, while others appeared even further down, according to Vestager's probe.

"Visibility and traffic are two sides of the same coin, and I am using the word coin literally," the commissioner said.

"What Google has done is illegal under EU antitrust rules. It denied other companies the chance to compete on the merits and to innovate. And most importantly, it denied European consumers a genuine choice of services and the full benefits of innovation," the Danish politician said.

The €2.4 billion fine is the biggest ever for an antitrust case, and more than twice the sum handed down to US chipmaker Intel in 2008, which was the previous record.

It it calculated to have a deterrent effect and was based on Google Shopping revenues in 13 countries where the service is available and the EU has jurisdiction, as well as the duration and gravity of the infringement.

Google has 90 days to change its service so that all shopping sites are treated equally, or face a penalty of up to 5 percent of its average global turnover.

Google will not be given any guidelines from Vestager for how to do that, who said it is up to the company to find a way of implementing the order.

Google says the commission cannot prove the anti-trust changers and will likely appeal the decision, which could take years.

It says the commission takes issue with the format of their ads, which are more attractive than those of its competitors.

Google's legal chief Kent Walker defended placing the ads higher on the site, saying: "When you shop online, you want to find the products you’re looking for quickly and easily. And advertisers want to promote those same products. That's why Google shows shopping ads, connecting our users with thousands of advertisers, large and small, in ways that are useful for both."

The company also says the EU executive is working with a dated picture of the competition in shopping services, and that competition has thrived despite Brussels' claims of misuse of its market position.

"We respectfully disagree with the conclusions announced today. We will review the commission’s decision in detail as we consider an appeal, and we look forward to continuing to make our case", the firm said.

Google is also facing charges of abuse of its dominant position in two other EU cases.

Those involve imposing allegedly unjustified conditions on manufacturers and mobile network operators using Android, its phone service, and banning competitors from websites using its search bars and ads by way of protecting its dominant position in online advertising.