Ukraine: Watching the war on Russian TV - a whole different story
By Simona Kralova & Sandro Vetsko
BBC Monitoring
Published12 hours ago
Never was there a better illustration of the alternative reality presented by Russian state media than at 17:00 GMT on Tuesday. As BBC World TV opened its bulletin with reports of a Russian attack on a TV tower in the capital Kyiv, Russian TV was announcing that Ukraine was responsible for strikes on its own cities.
So what are Russian TV viewers seeing of the war? What messages are they hearing over the airwaves? Below is a snapshot of what ordinary Russians would have picked up, on Tuesday 1 March, while channel-hopping across the country's key TV stations, which are controlled by the Kremlin and its corporate allies.
Short presentational grey line
Good Morning, on state-controlled Channel One, one of Russia's most popular channels, is to the casual observer not unlike the breakfast broadcasting found in many other countries with its mix of news, culture and light entertainment.
On Tuesday the normal running order is interrupted at 05:30 Moscow time [02:30 GMT]. The presenters announce that TV schedules have been changed "due to well known events", and there will be more news and current affairs. The news bulletin suggests that reports about Ukrainian forces destroying Russian military hardware are false, designed to "mislead inexperienced viewers".
"Footage continues to be circulated on the internet which cannot be described as anything but fake," the presenter explains as the viewer is shown photographs of what is described as "unsophisticated virtual manipulations". 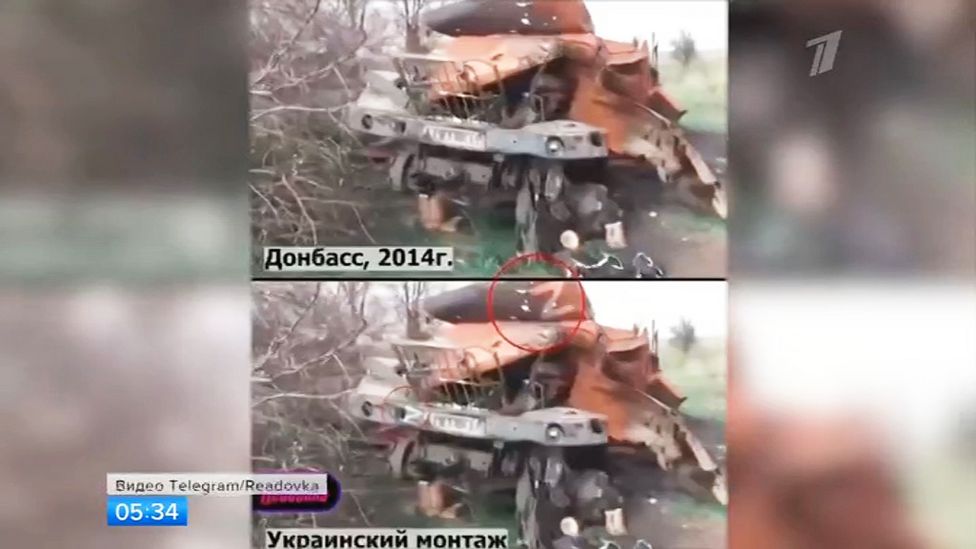 |Russia's Channel One presenter showed two photos of the same military vehicle - the top photo is captioned "Donbas 2014" and the bottom one "Ukrainian montage". He claims the top photo is of a Ukrainian vehicle destroyed in the conflict zone in 2014 and that the bottom photo is of the same image, manipulated to make it look like newly destroyed Russian hardware. He says a "Z" has been added - a common marking for Russian military equipment.
Later in the morning, at 08:00 Moscow time, we tune in for the morning bulletin from television channel NTV, which is owned by a subsidiary of Gazprom, a Kremlin-controlled firm. It concentrates almost exclusively on events in Donbas, the region in the east of Ukraine where on 24 February, Russia stated it was beginning its "special military operation" to demilitarise and denazify Ukraine.
There is no mention of reports of the ominous miles-long military convoy snaking its way from Belarus in the north to Ukraine's capital Kyiv, which, in the UK, leads the BBC Radio 4 news bulletin half-an-hour later.
"We start with the latest news from Donbas. LNR [Luhansk People's Republic] fighters continue their offensive, having travelled 3km, while DNR [Donetsk People's Republic] units have travelled 16km," the NTV presenter says.
The presenter is referring to the Moscow-backed rebels who have been in control of the so-called Donetsk and Luhansk People's Republics since Russia's intervention in east Ukraine eight years ago. 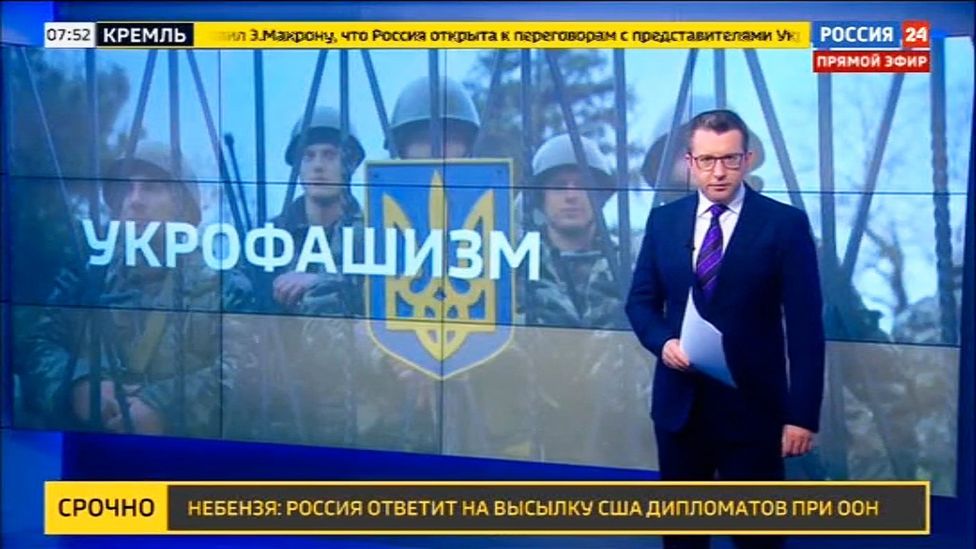 The caption in white from this report by Rossiya 24 TV reads: "Ukrofascism" -Ukrainian fascism
On Rossiya 1 and Channel One - Russia's two most popular channels, both state-controlled - Ukrainian forces are accused of war crimes in the Donbas region. The threat to civilians in Ukraine comes not from Russian forces, but from "Ukrainian nationalists", says the Rossiya 1 presenter.
"They use civilians as a human shield, deliberately positioning strike systems in residential areas and stepping up the shelling of cities in Donbas."
Channel One's presenter announces that Ukrainian troops "are preparing to shell residential houses" and bomb warehouses with ammonia, in "acts of provocation against civilians and Russian forces".
Events in Ukraine are not referred to as war. Instead, the offensive is described as a demilitarisation operation targeting military infrastructure or a "special [military] operation to defend the people's republics".
Across state-controlled TV, presenters and correspondents use emotive language and images to draw "historical parallels" between Russia's "special military operation" in Ukraine and the Soviet Union's fight against Nazi Germany.
"The tactics of nationalists who use children to shield themselves have not changed since the Second World War," says the presenter of a morning show on Rossiya 1's sister channel, Rossiya 24.
"They behave like fascists, in the very sense of this word: neo-Nazis put their hardware not just next to residential houses but where children take shelter in basements," adds the correspondent in a video report captioned "Ukrainian fascism".

Blaming Ukraine
The passage echoes the unproven claims made by Vladimir Putin last week that Ukraine was using women, children and the elderly as human shields.
While media in the West has been asking whether Putin's assault has struggled to make quick progress, Russian TV portrays the Russian operations as very successful. Regular updates give numbers of destroyed Ukrainian hardware and weaponry. More than 1,100 Ukrainian military infrastructure facilities have been disabled and hundreds of pieces of hardware have been destroyed, morning news reports say. There is no mention of any Russian casualties.
Russian morning news bulletins barely acknowledge its army's offensives in other parts of Ukraine. State TV correspondents are not reporting on the ground from places like Kyiv and Kharkiv, the two major cities that have seen shelling of people's homes. Instead, they are embedded with troops in Donbas.
But by the afternoon edition of the news, NTV finally mentions the news event that has dominated hours of coverage on the BBC by this stage - the shelling of the city of Kharkiv.
However, it debunks any reports that Russian forces are responsible, calling them "fake".
"Judging by the trajectory of the missile, the strike was delivered from the north-west where there are no Russian forces," the presenter says during the 16:00 Moscow time edition of the news. Four hours later, a bulletin by Rossiya 1 goes further, blaming Ukraine itself for the bombing.
"To strike Kharkiv and say that it was Russia. Ukraine is hitting its own and is lying to the West. But is it possible to deceive the people?" it asks.
During a 17:00 bulletin, the Rossiya 1 presenter outlines what she says is Russia's "main objective" in Ukraine: "The defence of Russia against the threat from the West, which is using the Ukrainian people in its stand-off with Moscow."
To counter what is described as "fake news and rumours" about Ukraine which are circulating online", she announces that the Russian government is launching a new website where "only true information will be published". 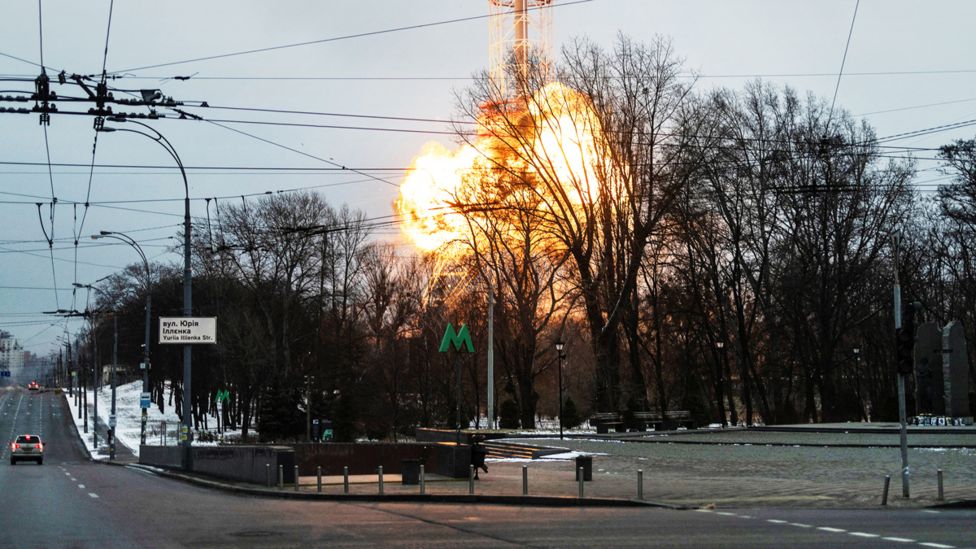 |Blast at a TV mast in Kyiv, 1 March 2022
TV stations are required by the media watchdog Roskomnadzor to follow the official narrative.
But that is not to say that there was no variety in the tone of Tuesday's reporting. While the news bulletins talked of Ukrainian war crimes, Vyacheslav Nikonov, pro-Kremlin host of Channel One TV's current affairs talk show The Great Game, spoke about his love of Ukraine as he signed off.
"I very much love Ukraine, I love Ukrainians. I have travelled across the country on multiple occasions. It indeed is a brilliant, wonderful country. And I think Russia is, of course, interested in it being a prosperous, friendly country… Our cause is just. We shall be victorious."
Increasing numbers of younger Russians tend to get their news from independent websites or social media, and the longer the war goes on, the more images and videos of dead soldiers and prisoners of war are surfacing. But the authorities are responding to this and turning the screws on independent reporting.
Roskomnadzor has ordered TikTok to remove military and political content in its suggestions to minors, complaining, "in most cases, these materials have a pronounced anti-Russian character". It also demanded that Google remove what it describes as false information about the Russian army's reported losses, and Reuters reports it has re-imposed a slowdown on Twitter's loading speeds over "fake reports" of Moscow's "special military operation", and restricted access to Facebook.
It has instructed media outlets to use information only from official Russian sources when reporting the invasion, demanding that they take down any reports referring to "a declaration of war" or "an invasion". It has threatened them with fines and blocking if they do not take action. The websites of the independent TV channel Dozhd and popular liberal radio station Ekho Moskvy have been blocked for alleged calls for extremism and violence, and "systematic spread of false information about the activities of the Russian military".
–––––