BY VALENTINA POP
BRUSSELS - German Chancellor Angela Merkel on Friday (30 May) gave her first clear endorsement of Jean-Claude Juncker to become the next president of the EU commission, after criticism back home about EU leaders ignoring the democratic process. 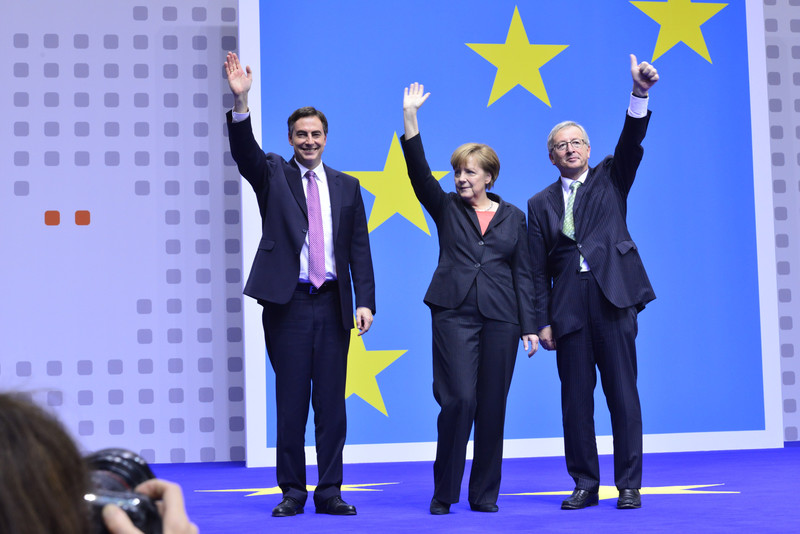 Speaking at a Catholics' gathering in Regensburg, Merkel said that the centre-right European People's Party and its top candidate (Spitzenkandidat) Juncker came in first after last week's EU elections.

"That is why I am now conducting all of my talks in the spirit that Jean-Claude Juncker should become president of the European Commission," Merkel said.

She said it was her "credo" to find a joint solution that doesn't "alienate people".

"That doesn’t mean giving up your position, just that you take a deep breath and ask one more time what the others want and what reservations there are. Europe is very laborious," Merkel added.

This is the first time she has given such strong backing for Juncker. After an EU summit on Tuesday where leaders decided not to explicitly endorse the former Luxembourg leader, she there are "others" who could do the job just as well. She added there would be lengthy negotiations with member states and the European Parliament, which also need to take into consideration the other top posts.

Juncker was opposed even within the EPP party by the leaders of Sweden and Hungary, as well as outside the EPP group by Britain's David Cameron and the Netherland's Mark Rutte.

But a backlash from members of her own coalition triggered Merkel's u-turn.

Elmar Brok, a leading MEP from her own Christian-Democratic Union, told Sueddeutsche Zeitung that EU leaders should "be aware of the fact that the European Parliament will insist on imposing the will of the voters".

Merkel's coalition partner Sigmar Gabriel, head of the Social Democrats, said in an interview with Tagesspiegel that Europe is in such a "difficult situation" that it needs both Spitzenkandidaten - Juncker and Martin Schulz, top candidate of the Social-Democrats.

Gabriel was making reference to the success of far-right and anti-EU parties in the EU vote, a fact that is likely to push the centre-right EPP and the Social-Democrats to work closely together.

Gabriel said Schulz should be part of the next EU commission, indicating that the German MEP may get a prominent post if Juncker becomes commission chief.

In addition, the mass-selling tabloid Bild Zeitung on Friday ran an editorial by its publisher with the title "Juncker must become president".

"One thing is clear: Europeans want Juncker to become EU president. Schulz has the second-best result. A third person, someone who didn't stand for election, should not get the job. Otherwise democracy turns into a farce. Maybe that was possible in the [east German] DDR or in right-wing nationalist banana republics. But not in the EU," wrote Matthias Doepfner, the CEO of Axel Springer publishing house to which Bild belongs.

For Juncker to become commission president, he needs a 'qualified majority' of member states, with bigger countries having a greater say. The UK alone, even if backed by Sweden, the Netherlands and Hungary, would not have enough votes to block the move. 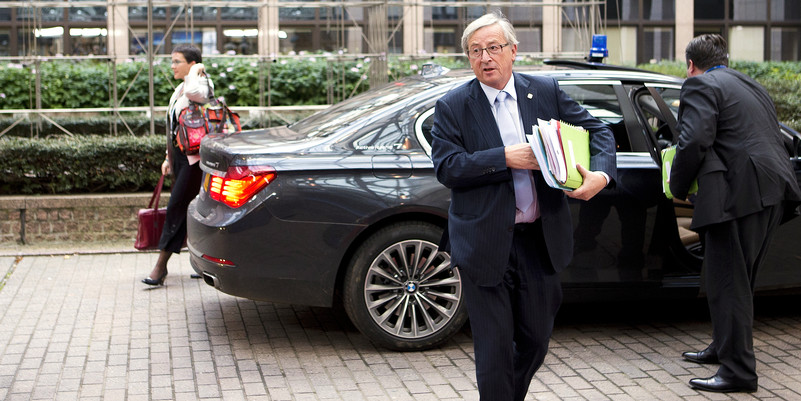 Jean-Claude Juncker is causing a bit of stir among EU leaders (Photo: consilium.europa.au)

EU states at odds over Juncker
TODAY @ 09:28
by VALENTINA POP

BRUSSELS - Jean-Claude Juncker may have been endorsed by Germany for the European Commission top job, but Italy and France have signalled opposition, while Britain has warned about the consequences of choosing the former Luxembourg PM for the post.

A British official on Sunday (1 June) confirmed to Reuters that British PM David Cameron at an EU summit last week told fellow leaders that Juncker was not the right person for the job and that if he is picked, it will be more likely that Britons would vote to leave the EU.

The official however dismissed reports that Cameron threatened to bring forward a referendum on Britain's EU membership if Juncker became commission President.

German magazine Der Spiegel the same day had reported that Cameron told fellow leaders his government would be destabilised to such an extent if Juncker is picked, that the referendum planned for 2017 would need to take place sooner and that Brits would likely vote to leave the EU.

Der Spiegel also reported that German Chancellor Angela Merkel at that same summit opposed Juncker being appointed as the negotiator with member states and the European Parliament, and that she preferred EU Council chief Herman Van Rompuy to do the job instead.

On Friday, however, Merkel gave Juncker her strongest endorsement so far, saying that she is "now conducting all of my talks in the spirit that Jean-Claude Juncker should become president of the European Commission."

But Cameron is not alone in his anti-Juncker stance. Sweden and Hungary have already spoken openly against him.

And on Sunday, Italy's Prime Minister Matteo Renzi said Juncker has no automatic right to the post.

"Juncker is 'one' name for the Commission, but he is not 'the' name," Renzi said during an economic conference in Trento.

Renzi, who is a Social Democrat, is not part of the European People's Party which put Juncker forward as top candidate for the EU elections.

German mass-selling tabloid Bild am Sonntag reported that Hollande is trying to block Juncker and to get the post for his former finance minister, Pierre Moscovici.

Hollande's purported argument is that with the far-right National Front winning the EU elections in France, a signal of support for his government is badly needed.

For Juncker to get the nomination of EU leaders for the commission job, a 'qualified majority' is needed, where bigger states have a weightier vote. If Italy and France abstain or say No, while Britain, Sweden and Hungary vote No, Juncker does not have enough votes.

For his part, Juncker remains upbeat. He told Bild am Sonntag he is "optimistic about being chosen as the next Commission president by mid-July".

Being endorsed by EU leaders is only part of the process. He would then also need majority backing in the EP. The parliament is also due to vote again in autumn on the composition of the new EU commission, after conducting hearings of each commissioner candidate.