––> Italy is setting itself up for a monumental fiscal failure

Italy is setting itself up for a monumental fiscal failure
Confrontation over spending is reawakening the dormant eurozone crisis
WOLFGANG MÜNCHAU
( "The Financial Times", 28.10.2018 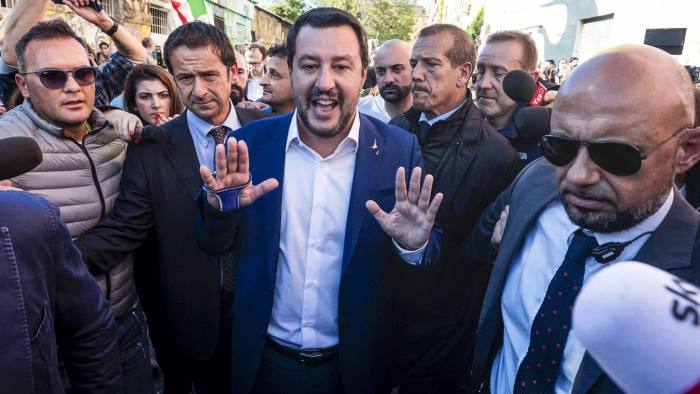 Matteo Salvini suggested Rome could recapitalise the banks, but EU legislation no longer allows governments to do that in the way they used to

The short history of the eurozone has taught us that resistance is futile.
You cannot extricate yourself from its rules, to which all member states have agreed. Unless the Italian government has a clear-headed strategy for a eurozone exit, therefore, it is setting itself up for a monumental failure.
The leaders of the far-right League and the Five Star Movement have strong views, but I do not believe they have a strategy.
The main instrument of coercion in the eurozone is not its fiscal rules, but the power of the European Central Bank to withdraw funding from national banks. This is not a discretionary power, but one that is automatically triggered once a country‘s sovereign debt loses investment grade status. If the banks have large holdings of their home countries’ debt, as is the case in Italy, they are setting themselves up for failure if their governments run an unsound fiscal policy. The trigger for the current rise in Italian bond yields was the rule-busting 2019 budget.
The previous Italian government agreed to a deficit target of 0.8 per cent of gross domestic product in 2019. The current government’s budget foresees a deficit of 2.4 per cent. The European Commission also disagrees with the optimistic assumptions for future growth, and fears further slippage.
Olivier Blanchard and Jeromin Zettelmeyer, of the Washington-based Peterson Institute of International Economics think-tank, have concluded that the fiscal plan would not boost growth and might even reduce it. The commission is right on substance. Whether it was wise to take on a country that is too big to fail is another matter. Italy will need to issue some €250bn in debt next year. The spread of Italian 10-year debt over equivalent German bonds has been at around 300 basis points — or 3 percentage points — for most of this month.
The Italian finance minister, Giovanni Tria, said such a spread would not be sustainable. He is right. So what will happen when the unsustainable ends? There are a few steps the Italian government can take. However, most breach EU rules. Matteo Salvini, the deputy prime minister and leader of the League, suggested that the government could recapitalise the banks, which will need to refinance €18bn of their own bonds next year.

This is not so easy. EU legislation no longer allows governments to recapitalise banks in the way they used to. A bank that fails to meet solvency rules has to be propped up or wound down, according to an EU-wide bail-in regime of shareholders and bondholders. Another option is a raft of policies that falls under the broad category of financial repression. Beyond tax incentives for Italian savers in favour of Italian government bonds, the government could impose outright capital controls, by forcing Italian-based investors to keep their savings inside the country.
Greece and Cyprus introduced capital controls during times of crisis, but those were agreed by the EU. A further escalation would be a parallel currency. Before this year’s elections, the League had drawn up plans for so-called mini-BoTs. These are state-issued securities that look like euros and have the same denominations. The big idea was to make mini-BoTs eligible for the payment of tax debt.
Shops and individuals would therefore have reason to accept them as a means of payment — at a certain (but not very large) discount to the euro. I have no idea whether the EU has any effective legal instruments to stop Italy from doing any of this. But, in any case, capital controls or parallel currencies would render the whole idea of a monetary union absurd. The main characteristic of a monetary union is not the legal-tender status of a single currency, but its function as a common monetary area with a free flow of payments.
If the eurozone were ever to break up, this is how it would happen. Nobody would formally dissolve it. It would be a death by parallel currencies and capital controls. If Italy were to introduce a mini-BoT, it is not hard to see how such a scenario could eventually give rise to a formal eurozone exit in the distant future. Once the economy had adjusted to the second currency, it would be easier to make the switch. There can be no doubt that Italy’s behaviour is not in tune with how a member of a monetary union should act. Then again, Germany’s persistent current account surpluses are also a breach of EU rules — specifically, the requirement to maintain a broad degree of macroeconomic balance. And France has breached EU fiscal targets for many years.
The eurozone’s dysfunctionality has many origins. It would be unfair to blame it all on Italy. The rise in Italian spreads is evidence that the eurozone crisis never ended. It just fell dormant for a while.
––––––